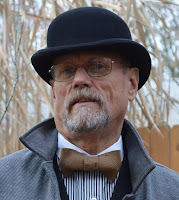 This year we are very pleased to present SweAme Registered User, David Anderson, from Portland, Oregon and the Swedish Roots In Oregon organization.

After several years of independent data entry on the SweAme Swedes In Oregon and Clackamas County (Oregon) data base trees, David Anderson was encouraged to attend a Swedish Roots In Oregon (SRIO) Board Meeting.  A few months later, he was elected to be a genealogist with SRIO.  He enjoys making frequent trips to the Oregon State Archives in Salem to scan documents there and post them to the ever expanding SRIO data base and on the Clackamas County and Oregon trees, which are now both under SRIO’s umbrella.  Documents which can now be found, free of charge to the public, include marriage records, prisoner, State Hospital admittance, probate, death certificates and immigration documents.

In 1999 Ross Fogelquist (in Portland) came up with an idea that he presented to the New Sweden Cultural Heritage Society.  That idea was so grand and so large it was decided to start an entirely new group that would be devoted to research, document and preserve the history of Oregon’s Swedish immigrants.  Out of that idea was born the Swedish Roots in Oregon (SRIO) project, which was granted tax deductible status by the Internal Revenue Service in December 1999.  Ross continues to be an active member of SRIO, and it is his home Fogelbo, a warm inviting log cabin richly decorated with Swedish memorabilia that the SRIO, where the SRIO Board of Directors meets.
The small, but active SRIO Board (see members data below) continues adding to and publishing results of the rich knowledge of Swedish Immigrants to Oregon.  We encourage you to take part, and to donate to, Swedish Roots In Oregon.


There are five goals that SRIO has:


4.      Research the lives, settlements and achievements of Swedes in Oregon and publish the results; and


5.      Build an archive of oral histories of Swedish immigrants.   Over 14 booklets and books have been published by SRIO, the database, now on the SweAme.org website is expanding and including scans of documents found at the Oregon State Archives.
Rhonda Erlandson’sfather emigrated from Sweden in 1948 a few years before Rhonda was born. Rhonda grew up steeped in Swedish culture and was fortunate to make several trips to Sweden. Family members still live near the northern city of Lycksele. She became involved with SRIO, like several others, thru an invitation from Ross Fogelquist. She knew she wanted to roll up her sleeves and help with research efforts uncovering and sharing the rich history of Oregon’s Swedish heritage. After serving as SRIO Secretary for a few years Ronda was elected President in January 2016.
Herje Wikegard, first generation immigrant, stepped up and designed a new webpage, when a new one was needed.  We now have www.swedishrootsinoregon.org thanks to Herje.  It has changed tools periodically and new information gets added from time to time.  And, Herje serves as SRIO’s treasurer too!
Mike Timshel, 2nd generation immigrant, didn’t seriously begin studying Swedish until about 15 years ago, despite his father being the first generation immigrant!  A few years ago Mike was encouraged by Lars Nordström to attend an SRIO Board Meeting, and a few meetings later was elected to be a Board Member at large, and loves translating Swedish works in to English!
Ann Stuller
and David Anderson serve as genealogists for SRIO.  One of Ann’s Swedish cousins helped start SVAR in Ramsele, Sweden, and later presented the family with a
written family tree that furthered Ann’s interest in genealogy.  Ann has taught conversational Swedish at Portland Community College for 20 years.  In addition to genealogy Ann enjoys photography and painting.  One of her photos graces the cover on one of SRIO’s books!  She was invited to an SRIO meeting by long term friend Ross Fogelquist.
David Anderson, in addition to genealogy, has long pursued other hobbies – such as photography.  Taking pictures was one of the most important activities that David enjoyed during his days in the United States Peace Corps.
Many of us take family photos for granted.   Many of us were given cameras at an early age, our parents had cameras, and their parents frequently had cameras.  David can build a photo tree back to his father’s grandparents.  That is not the case with most everyone in the world.
From 1975 to 1977 he was a Co-op Advisor with the Peace Corps on remote Ujelang Atoll in the Marshall Islands.  The people he worked with had been removed from Enewetak Atoll so the American government could test nuclear and thermonuclear device.  They are currently still experiencing negative impacts as a result of the testing period.
David was the only person on Ujelang with a camera.  One of his personal goals was to record life on Ujelang in the mid-1970s.  His Mom would send several rolls of slide film to him every few months.  After exposure the film would be sent home for developing.  The developed slides would be returned to Ujelang where he would make notes on them, as to who, what, where.   It is amazing to think that no rolls of film were lost in this process, since mail service to Ujelang was not daily, weekly, or monthly.  It happened when a field trip ship called every two or three months!
Album of photos on flickr from Ujelang:
https://www.flickr.com/photos/ujelang/albums/72157627166252140
In January 2016 David flew out to the Big Island of Hawaii to visit people he knew on Ujelang.  There are now living there more people with ties to Ujelang/Enewetak as there were in the mid-70’s.  Preparations for the trip included printing photos of people on Ujelang and giving them away.  The looks on people faces as they saw themselves, or a loved one 38 years ago was priceless.  One guy asked David if he had a photo of his father.  David looked at him and asked how old he was, and he said 46.  David had a photo of him and his brother, with their Dad.
A few days later they learned his older brother passed away in the Marshalls. 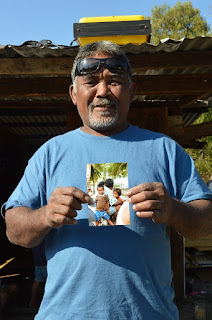 
SweAme Accomplishments:
Program Status
The SweAme (www.sweame.org) websites continue to facilitate the growing interest in digitizing our past (and present) and continues to exceed our expectations.  As of December 31, 2015, SweAme has exceeded the 1.1 Million mark of Individuals on our series of data bases.  This number is the count of Individual records (ALL persons on our websites) who were Swedish born immigrants or who were related (as ancestors or descendants) to the immigrants.
This year again there has been growth in all of the data base statistics – two are shown here:

Project Status
In 2015 the SweAme project teams have completed the state of North Dakota, and initiated the major projects for New York and Massachusetts.  This brings the websites total count of Swedish born immigrants up 417,091, which is 70% of the total number of emigrants who were living in America in the year 1900.
The total completed state count is 39, plus 63% has been completed for New York and Massachusetts.   This leaves SweAme with 37% of New York and Massachusetts and nine (9) remaining states to capture and document online.
Hardware & Software Upgrades
In 2015, there were no major upgrades to the SweAme hardware servers at Simply Hosting.
A major software upgrade has been partial implemented with the SweAme Gateway webpages.  These additional webpages have been implemented to provide a more user friendly experience.  The new webpages were developed using Responsive Web Design (RWD) techniques to provide self-adjusting webpages for any size of device – desk top, lap top, tablet and/or phones.  The new webpages use color images as selection buttons to LINK to the many different segments of the SweAme resources.  You can access the new pages at www.sweame.org.