To benchmark (so to speak) one of the SweAme 2012 accomplishments (the online documentation of the Iowa Swedish emigrants), this year’s “Special Feature” is the Swedish American Museum located in the community of Swedesburg, Iowa. 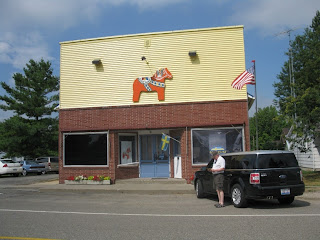 Swedish immigrants came to Southeast Iowa as early as 1845, establishing the first Swedish settlements in the Midwest.  In the 1860s Swedish settlers drained the marshy soil in northern Henry County to create a large new area of fertile farmland.  The village of Swedesburg grew at the center of this Swedish Heritage area.  Today, the Swedish American Museum preserves and celebrates this story of those settlers and their descendants.


Museum & Gift Shop Hours
9:00 AM – 4:00 PM
Monday – Tuesday, Thursday, Friday & Saturday
Also open by appointment.  Closed New Year’s Day, Thanksgiving & Christmas.
319 254-2317
Email:  swedish@iowatelecom.net
SweAme Purpose:
The Board of Directors of the SweAme non-profit organization would like to thank ALL of you for your participation this past year.
This year was our second full year as an incorporated entity and we are getting great start on accomplishing our primary purpose and goals.
Our purpose as stated in our IRS 501(c)(3) status request document and as contained in the SweAme By-Laws is:
A. SweAme is organized exclusively for charitable, educational, religious, or scientific purposes within the meaning of Section 501(c) (3) of the Internal Revenue Code.
B.  In particular, the purpose of SweAme is for educational and historical research;
·       by the  digital preservation of genealogy data, records, documents, and images related to persons of Swedish ancestry,
·       by promoting public knowledge of and an interest in the history of persons of Scandinavian - and particularly Swedish – ancestry,
·       by presenting the contents of the Online Internet data base as a and open resource for all public users,
·       by facilitating an environment of learning and participation by Swedish Emigrant’s Swedish and American descendants in the documentation of their own separate branches
Our goals and objectives to accomplish this purpose are being met by our growing volume of Registered Users and the accumulation of multiple types of historical information.  This growth has been the result of a strong growth in the interest in family genealogy and historical documentation by Swedish American and Swedish descendants and, of course, the increased availability and functionality of the Internet.
The SweAme focus will continue to be the digitization of the Swedish immigrants who were living in America and documented in the 1900 census records.  This basic immigrant family information is being updated by Registered Users on both sides of the Atlantic with information on their own expanding family branches.
SweAme Accomplishments:


The SweAme (www.sweame.org) website (aka as swedesintexas.com) has been well positioned to facilitate the growing interest in digitizing our past and present and therefore this interest has exceeded our expectations.  As of December 31, 2012, the data base statistics have more than doubled over the previous reporting year:
2012                                2011                  % Growth
Individuals:                   264,327                           124,473                112%
Families                            69,065                             32,526                 112%
Program Status
In 2012 SweAme project teams have completed the states of Maine, California, Iowa and Kansas.  This brings the total emigrant count up to 88,176, which is 15% of the Swedish emigrants who were living in America in the year 1900.  The total completed state and territory count is up to 28 (which includes Washington D.C. and St. Louis County, Minnesota).  This leaves SweAme with 24 remaining states and territories to capture and document online.
Hardware & Software Upgrades
This year’s significant hardware/software accomplishment was the expansion of the host services platform from one website data base onto three websites and three data bases.  This was necessary in order to prepare for the future data base storage and bandwidth requirements to support the growing number of Registered Users, now over 1,100.
The three SweAme websites are:
·       The original SweAme (aka Swedes In Texas) which includes most of the United States geographic areas (view at SweAme) ,
·       Swedes In Minnesota is planned for the immigrants who lived in Minnesota (view at Swedes In Minnesota), and
·       Swedes In ILNYMA is planned for the immigrants who lived in the three states – Illinois, New York and Massachusetts (view at Swedes In IL, NY & MA.
Project Completions
This year’s major project accomplishment was funded by the The Barbro Osher Pro Suecia Foundation.  This project was completed in August and included the Swedish immigrants that were living in 1900 in the two states; Maine and California.  It was executed by four contractors; Brenda Dahlberg (Dallas, Texas), Kathie Pearson (Stamford, Texas), Melissa Loftus (Grafton, Illinois) and Maria Sällemark (Hässelby, Sweden).
Process Revision
This year’s most significant technical/process accomplishment was the development and implementation of an Excel Macro developed by Norm Lundquist from Iowa.  His Macro has dramatically changed the SweAme execution process from keying data onto the website to a “copy and paste” function.  The “copy and paste” function is followed by a Macro software execution that builds the data file that is imported by the SweAme genealogy software onto the website data bases.  We owe Norm (a volunteer) a huge debt of thanks for his willingness to assist our SweAme program.  This improvement in process decreases project time and cost by a factor of 7 to 8 times – dependent upon the concentration of Swedes in a particular township.
Personal Contacts Obtained
This year’s most rewarding accomplishment was connecting a Swedish descendant born and raised in Australia with a cousin born and raised in Texas.   Cousin connections have occurred several times over the past five years that SweAme has been Online. But, this event was very unique.
Brett Lynn from Orbost, Victoria, Australia (a down under mate) got a SweAme website hit on a Swedish emigrant Charles Theodor Suderman who was a brother to his great-grandfather Gustaf Elof Sederlan (previously spelled as Suderman and Söderman in Sweden).  Brett became our first user from Australia.  The Swedish emigrant that he had found had traveled the oceans and landed up for good in Galveston, Texas.  Brett’s ancestor - Gustaf Elof Sederlan - had also traveled the oceans.  And, he had landed and stayed in Sydney, New South Wales to settle in Trentham, Victoria, Australia. 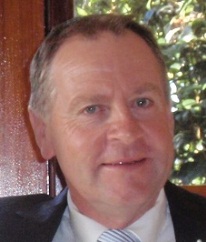 Brett
Brett asked for some help in finding a living cousin in America. In this case, we had a very short distance to look. Charles Theodor Suderman had a grandson by the name of Charles Theodore Suderman - who just happened to be one of our SweAme Registered Users.   As they say “THAT’S WHAT I AM TALKING ABOUT”. J 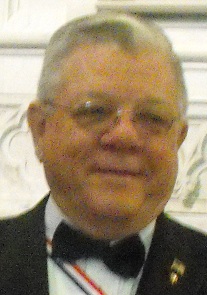 Here is their Relationship Chart.

We are very excited that the SweAme website can facilitate such a rewarding event that brings Swedish descendants together – no matter where in the world they live.
Special Recognition
The SweAme management team would like to recognize and sincerely thank two outstanding Registered Users for their significant contribution in 2012.  These two are David Anderson and Charles Lundquist.
David, who lives in Portland, Oregon, is just a history nerd. We say that with Great respect. He has spent many many hours over the past two years in visits to the Oregon State Archives in Salem - researching Swedish emigrant’s death certificates. David has found a number of Swedish emigrants who were inhabitants at the Oregon State Penitentiary around 1900. He considers that these prisoners do in fact deserve at least an asterisk of recognition in our common heritage story. David has also mentioned that the “booking photos” (that he has obtained and uploaded to the website), may be the only identified photograph in existence of these Swedes.  You will really be amazed and will enjoy viewing and reading his work.
David’s Oregon State Penitentiary contribution can be viewed at:
Oregon State Penitentiary Album
Charles Lundquist (a brother to the Norm Lundquist mentioned above) is from metro San Antonio, and he enjoys playing golf in the Texas sun.  But, he also enjoys capturing and collecting genealogy data.  So much in fact, that in March, 2012, he asked if he could help document the Swedes in Iowa.  Chuck was born and raised in the Dayton, Iowa farming community.  This past year he has spent tons of hours at his computer, capturing the census data for more than half of the 30,000 plus emigrants who lived in Iowa in 1900.  He also contributed to a portion of the work on the Swedes in Kansas project.  We recognize Chuck and thank him for his tireless effort to assist the SweAme program.
You can browse some of Chuck’s work at:  Iowa Emigrants Report
SweAme Summary Financials:
2011 Income held over:     $4,370.21
2012 Expenses - BOPSF:    $4,379.96
Net Income/(loss):              ($       9.75)
Board of Directors:
Doug Anderson, Richmond, Texas
Lissa Bengtson, San Antonio, Texas
Larry Blomquist, Mesa, Arizona
David Borg, Salem, Missouri
Elin Criswell, Georgetown, Texas
Jason Eckhardt, Jersey City, New Jersey
Pam Hicks, Tyler, Texas
Organization Advisor:
John Norton, Moline, Illinois
(For management team bios, go to:  SweAme Management )
Finest regards,
David Borg, Chairman
Completed States/Territories:
Arizona Terr.
California
Hawaii Terr.
Indian Terr.
Iowa
Kansas
Louisiana
Maine
and, Minnesota (St. Louis County)