The annual celebration of Saint Lucia took place at Hutto Lutheran Church (Hutto, Texas) on Sunday, December 7th immediately following the regular worship service. The young lady representing St. Lucia was Kirstyn Lawson, a freshman at Hutto High School, and a very active member of Hutto Lutheran Church. Kirstyn wore the traditional white dress with a red sash and a crown of lights in her hair. She watched over the maidens and star boys as they served cookies, Swedish rolls, and tea to the members of the congregation. 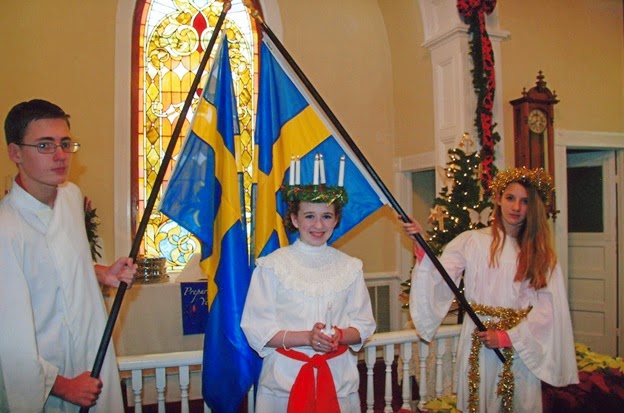 
The celebration of St. Lucia Day, which is always on December 13th in Sweden is a day that the Swedish people remember a time of famine in their country, and how a Christian martyr brought food and drink in their time of need. The years of famine is what prompted so many immigrants from Sweden to settle in the Hutto area in the late 1800 and early 1900's. The black land was rich and fertile, and the Swedes recognized plentiful and good farmland when they saw it.


St. Lucia Day is also the beginning of the Christmas season in Sweden. In the early morning hours, it is customary that Swedish families awaken to have their own “Lucia” sing to them as she takes breakfast from room to room, waking her parents and grandparents. Lucia is typically the oldest girl in the family accompanied by her sisters and brothers.


The Swedish Evangelical Lutheran Church of Hutto was founded in 1892 by Swedish immigrants. The services were conducted in Swedish until after World War Two. Many of the Swedes that settled in the Hutto area came from the Småland region of Sweden, one of which was Gustaf Hyltin, who helped to build the current Hutto Lutheran Church building in 1892. Several of his relatives came from out of town and attended worship and the celebration of St. Lucia on Sunday. They also brought their family Bible, a prized possession which is written in Swedish, for members of the congregation to view.

Posted by David Borg at 8:05 AM No comments: