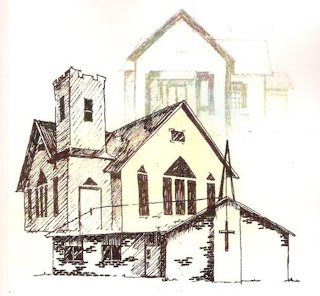 
The marquee no longer lights  words of inspiration or worship times. The parking lot is now empty and inside the walls are bare.  On Sunday, April 7, 2013, the nearly 122 year-old Georgetown Evangelical Free Church (EFC) held its last official service.


The Georgetown Evangelical Free Church was established in 1891 by Swedish immigrants, making it the first EFC in Texas. The EFC allows its members to play an important role in the church's decision-making process. On February 17th, during the congregational meeting, 26 members put the church's fate to a vote: 15 to 11 in favor of closing the church's doors permanently.


For months this decision weighed heavily on the heart's of church members. The main reason behind this vote was the chronic low attendance and the inability to recruit new members to the congregation.


Although the church doors are closed, the life of GEFC has been recorded in The History of the Georgetown Evangelical Free Church published last year by Glynda Joy Nord. Within the book's pages, besides an historical sketch of the church, are the confirmation pictures, a message from all of the pastors who served, a biography of early members, Swedish traditions of yesteryear, and Swedish recipes. The book is available through: Amazon, Barnes and Noble, and Trafford Publishing.

Posted by David Borg at 4:49 AM No comments:

Swedes in the Midwest: Chicago


By 1900, no city in the world but Stockholm could boast more Swedes than Chicago, Illinois!  Ja! Chicago was a growing gateway to the farming areas of the Midwest that were hospitable to Scandinavians who sought their own piece of the American Dream. And the city itself was attractive to urban Swedes, so Chicago presented a win/win opportunity for Swedish immigration and entrepreneurship.


Today, Chicago still has much to offer related to Swedish research and sightseeing. If you know or believe that your Swedish ancestors have Chicago connections, for research there is the Swedish-American Historical Society at 3225 W. Foster Avenue.  The Swedish American Archives of Greater Chicago is located there, too. The e-mail address for the archives is archives@northpark.edu.


Of course, you also will want to remember that there are numerous Chicago “categories” listed in the card catalog at Ancestry.com. These include the requisite census documents for the State of Illinois as well as Chicago voter registrations, newspapers with obituary indices, and a Chicago and Cook County Guide to Research. Some of these documents may also be found elsewhere in books and on the Web.

Posted by David Borg at 4:24 AM No comments: